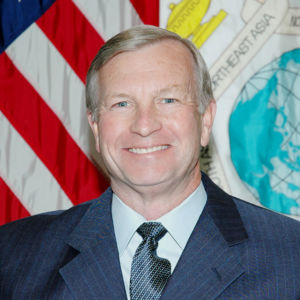 Dick Sears joined the Daniel K. Inouye Asia-Pacific Center for Security Studies (DKI APCSS) in July 2002 and serves as the Dean of Admissions & Business Operations. His responsibilities at the Center encompass all business operations to include finance, personnel, information management systems, infrastructure, global workshops/engagements, the Research library and all aspects of participant admissions to the College of Security Studies. His principle activities at the Center are focused on the transformation of operations to support DKI APCSS long-term strategic plan.

Mr. Sears previously served as the Chairman of the Department of Transnational Studies in the College of Security Studies where he was responsible for the establishment of the Counter Terrorism program at DKI APCSS to include the Comprehensive Security Responses to Terrorism course of instruction. He is also a retired naval officer and aviator who spent over 20 years of his career deployed to and engaged in operations conducted throughout the Indo-Asia-Pacific Region. Prior to arriving at DKI APCSS he served as Commander, Helicopter Anti-Submarine Light Wing, U.S. Atlantic Fleet while the command was engaged in operation Enduring Freedom and numerous bilateral and multilateral operations. Previous command assignments include Commanding Officer of Helicopter Anti-Submarine Squadron Light THIRTY-SEVEN (HSL-37) and Commanding Officer of Sea-based Weapons and Advanced Tactics School Pacific. Shore assignments included tours in the Force Structure, Resource and Assessment Directorate (J-8) of the Joint Staff, as Strike Warfare Requirements and Assessment Officer on the staff of the Commander, United States Pacific Fleet and tours at the Naval War College and Armed Forces Staff College.

Mr. Sears community activities include past service as Chairman of the Board of Directors for Easter Seals Hawaii,
volunteer work with Special Olympics Hawaii and past service in the Rotary Club of Honolulu.