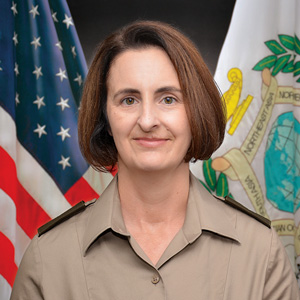 Lieutenant Colonel Hearne received her commission in 2002 from Furman University. She began her Army career as an Aviation Officer before transitioning to duty as a Foreign Area Officer in 2011.

Lieutenant Colonel Hearne was born in Utah but raised in Florida. She completed her Bachelor of Arts degree in 2002 at Furman University with majors in political science and philosophy. In 2012, she graduated from the Defense Language Institute Foreign Language Center with an Associate of Arts degree in Japanese Language. In 2015, she earned her Master of Arts in Regional Studies: East Asia from Columbia University in the City of New York.