Ms. Jennifer Key (Samoa), ASC17-2, Assistant CEO of the Policy Division at the Ministry of the Prime Minister and Cabinet, has been named as the DKI APCSS Alumna of the Year Award 2018!  The Center receives many nominations each year.  She helped draft Samoa’s first National Security Policy.  Jennifer was chosen for this award based on the significance of her achievement and for the impact of this project, not only for Samoa, but also for the positive influence it had on other Oceania countries intent on creating their own national security policy.  Jennifer attended the five-week Advanced Security Cooperation Course at APCSS in 2017.  Fellows attending the course are required to identify a project that they can advance while at APCSS, a project that builds individual, institutional or national/regional capacity and/or advances security cooperation.  During the course, with the help of her classmates and with the advice of faculty members, she developed a plan for drafting Samoa’s National Security Policy.  While Jennifer initiated this project, she confirmed that its implementation was a team effort.  We are so very grateful and proud of Jennifer for putting into practice that which she learned at DKI APCSS, and for taking action to help build Samoa’s security capacity with this significant national policy document.  Her achievement serves as a model, not only for other countries striving to develop similar policies, but it also stands as an outstanding example for all of our alumni. 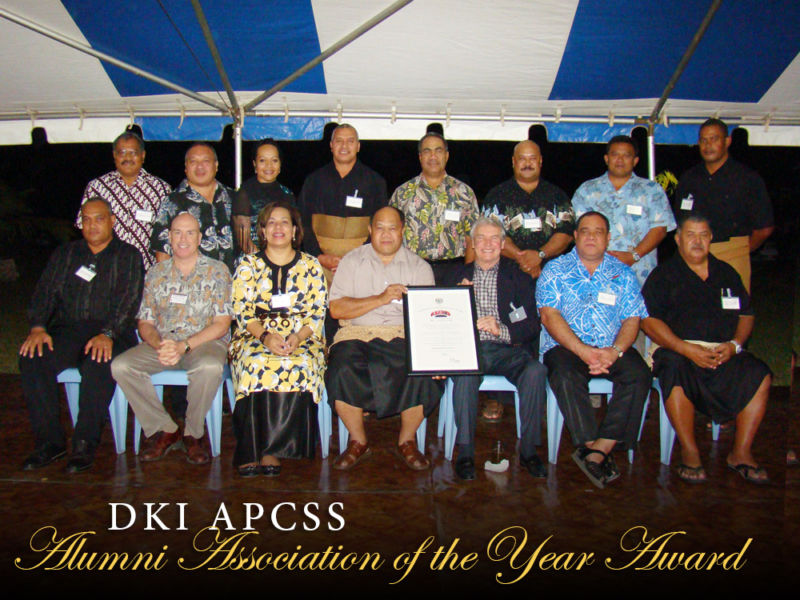 Congratulations are also in order to the Tonga DKI APCSS Alumni Association for earning the DKI APCSS Alumni Association of the Year Award 2018!  The Tongan alumni, led by Chief of Defense Staff, Brigadier General Lord Fielakepa, worked with the U.S. National Guard, the U.S. Embassy and DKI APCSS in hosting a Women, Peace and Security (WPS) Symposium.  Additionally, the alumni significantly contributed to the development of a WPS National Action Plan, and hosted a major alumni event in Tonga.  The Tongan alumni contribution toward developing a WPS National Action Plan helped demonstrate Tonga’s commitment to an inclusive, whole-of-society approach to security, and it has a positive impact on Tonga’s national security capacity.  We applaud the Tongan alumni for their contributions to advance security, peace and prosperity, not only in Tonga, but in the entire region.