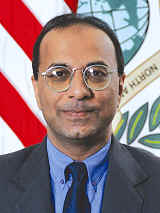 Dr. Malik’s article highlights the importance of the U.S. – China bilateral relations and asks the questions:

“What does the Asia-Pacific region want from China and the United States?”
“What sort of regional order Asians want to live in the years and decades ahead?”
“What is China’s vision of the regional order in the years and decades ahead?”
“More importantly, are the US and Chinese visions in sync with regional aspirations? What are the similarities and differences in those visions?”

Dr. Malik’s area of expertise is Asian Geopolitics & Proliferation, and he is internationally recognized as an expert and leader in U.S. – China relations and has written several books and articles on the subject.

Dr.  Malik came to the Asia-Pacific Center for Security Studies in February 2001 from Deakin University in Australia where he was Director of the postgraduate Defense Studies Program. He obtained his Ph.D. in International Relations from the Australian National University, M.Phil in Chinese Studies from Delhi University and Advanced Diploma in Chinese language from Beijing University. He is a trained Sinologist and has broad research interests in Asian Geopolitics, China’s Asia strategy, and nuclear proliferation in the Asia-Pacific. Dr. Malik has lectured at the Australian Joint Services Staff College, Warfare Studies Center, and Australian Defense College and has held Visiting Fellowships at a number of strategic policy “think-tanks” in Asia, Europe and the United States.

The views expressed in these articles are those of the authors and do not reflect the official policy or position of APCSS, the U.S. Pacific Command, the U.S. Department of Defense, or the U.S. government.