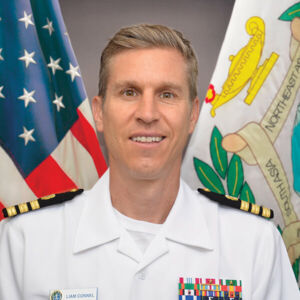 Commander Liam Connel joined the Daniel K. Inouye Asia-Pacific Center for Security Studies (DKI APCSS) in July 2022 following a tour as the legal advisor to the Director, Navy Staff in the Office of the Chief of Naval Operations.

CDR Connel was born and raised in California and commissioned with the Navy as a Judge Advocate General in 2003. He served as legal assistance attorney, defense counsel, trial counsel, staff judge advocate, and officer in charge during his first three Navy tours in San Diego, California, Rota, Spain and Lemoore, California from 2004-2011. From 2011-2012 CDR Connel served at the Office of the Judge Advocate General at the Washington Navy Yard, D.C., as the Flag Aide and Executive Assistant to the Deputy Judge Advocate General (Reserve Affairs & Operations). CDR Connel deployed to Afghanistan in support of Operation Enduring Freedom in 2012-2013, serving as the Chief of International and Operational Law in the Office of the Legal Advisor, NATO Training Mission-Afghanistan.

CDR Connel served from 2014 to 2017 as Assistant Fleet Judge Advocate at U.S. Pacific Fleet at Pearl Harbor, Hawaii, specializing in international and operational law.  During this tour he participated in Military Maritime Consultative Agreement negotiations in China and Hawaii with the Chinese military and lectured on law of the sea and the rules based international order in Vietnam, Indonesia and Cambodia.  He served as international law advisor to the U.S. Navy Region Commander, Europe, Africa, Central in Naples, Italy from 2017 to 2020, managing international agreements for U.S. military presence in Italy, Greece, Spain, Poland, Romania, Iceland, Bahrain and Djibouti.