Director Leaf to Depart DKI APCSS at End of Term 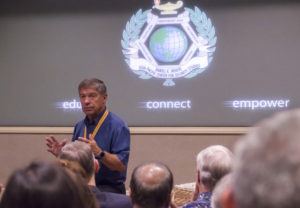 HONOLULU–Retired U.S. Air Force Lt.Gen. Dan “Fig” Leaf,  Director of the Daniel K. Inouye Asia-Pacific Center for Security Studies, has announced that he will be departing the Center at the end of his current term in in January 2017.  His last day in the office will be October 31, 2016.

“I have loved my time as Director,” Leaf said.  “I think it is important to recognize that DKI APCSS is much bigger than who is ‘in charge,’ and a factor in my decision was the belief that it needs to stay fresh.  The ‘Ohana is truly at the top of its game right now, and an extraordinarily credible institution.  That makes the time right for a transition, knowing that APCSS will continue to thrive, and that a number of high-caliber candidates will be attracted by the opportunity to lead the team.”

Leaf has been the director of the Center since January 2012.  While at the Center, he spearheaded the Women, Peace, Security (WPS) initiative which has led DoD’s efforts under the Women, Peace, and Security National Action Plan. DKI APCSS is committed to fostering an inclusive security sector through engagement and executive education of security practitioners in the Asia-Pacific Region.  Under his leadership, the Center also expanded its Security Sector Development program which focuses on good and accountable governance.

Prior to APCSS, he worked in the defense industry as vice president of full spectrum initiatives at Northrop Grumman Information Systems. Formerly the Deputy Commander of U.S. Pacific Command, Leaf retired from the U.S. Air Force in 2008 after more than 33 years of service.  A native of Shawano, Wis., he earned a BA in political science from the University of Wisconsin-Madison and earned his commission as a distinguished graduate of the university’s Air Force ROTC program in 1974. He earned a master’s degree in military art & science from the Command & General Staff College where he also served as a member of the faculty.  He was a member of the Air Force Scientific Advisory Board from 2009 through 2011.  Leaf was a command pilot with more than 3,600 flight hours, including F-15 and F-16 combat missions.

DKI APCSS is a Department of Defense institute that addresses regional and global factors impacting the Asia-Pacific security environment.  Military and civilian representatives from the United States and Asia-Pacific nations participate in a comprehensive program of executive education, professional exchanges and outreach events, both in Hawaii and throughout the Asia-Pacific region.

The Center supports the U.S. Pacific Command by developing and sustaining relationships among security practitioners and national security establishments throughout the region. DKI APCSS’ mission is to build capacities and communities of interest by educating, connecting and empowering security practitioners to advance Asia-Pacific security. It is one of the Department of Defense’s five regional security studies centers.

Since opening in 1995, more than 10,000 alumni representing over 122 countries and territories have attended DKI APCSS courses and workshops.