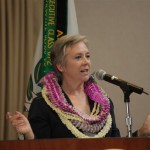 Her official welcome was part of the Center’s 15th Anniversary celebration and groundbreaking ceremony for its new wing.

In her introduction APCSS Director Lt. Gen. (Ret.) Ed Smith stated that Amb. Moriarty “is a genuinely talented and caring leader, scholar and role model.  She is accomplished in her field, highly experienced, widely sought for advice and counsel by senior officials all over the world, and most capable of helping to lead this complex organization in the next critical phase of its evolution. “

“I like the work the Center does to educate, empower and connect security practitioners in the Asia-Pacific region,” said Dean Moriarty.  “I look forward to working with the faculty and fellows as we pool our expertise on politics, economics and security to build a more peaceful and prosperous Asia-Pacific region.”

Moriarty retired from the U.S. Foreign Service in 2007, after a distinguished 29-year career. She then spent time in Bangladesh as a community leader in Bangladesh and frequent public speaker.

In 2003-2005, Moriarty served as U.S. Ambassador and Senior Official to Asia-Pacific Economic Cooperation (APEC), an international organization whose 21 members accounted for over half of global production and almost half of world trade.  She served simultaneously as the Department of State’s Deputy Assistant Secretary-level Coordinator for East Asian and Pacific Economic Issues.

Moriarty headed the Economic Sections at the U.S. Embassy in China (1999-2001) and the American Institute in Taiwan (1994-1997).  She provided critical assistance to bring those two, major economies into the global economy as members of the World Trade Organization.  Ambassador Moriarty also served as deputy head of the American Institute in Taiwan (1997-1998), the institution established by the U.S. Congress to manage relations between the people of the United States and the people of Taiwan.

As Director of the U.S. Department State’s Office of East African Affairs (2001-2003), Ambassador Moriarty was deeply involved in post-9/11 security issues in the Horn of Africa.  Earlier in her career, Moriarty was Diplomat-in-Residence at the East-West Center in Honolulu, Hawai’i.   She served additional tours at the U.S. embassies in China, Nepal, Pakistan and Thailand and at the American Institute in Taiwan.  She shaped policy on issues from multilateral aid to secure trade and action to counter threats from global pandemics and speed recovery from natural disaster.

The Asia-Pacific Center for Security Studies is a Department of Defense academic institute that addresses regional and global security issues.  Uniformed and civilian representatives of the U.S. and Asia-Pacific nations participate in a comprehensive program of executive education, professional exchanges and outreach events, both in Hawaii and throughout the Asia-Pacific region. APCSS’ mission is to educate, connect, and empower security practitioners to advance Asia-Pacific security.

Since opening in 1995, APCSS has had representatives from 96 countries, territories and international organizations attend courses at the Center for a total of 5,174 alumni. In addition, more than 8,000 participants have attended APCSS conferences, workshops and regional seminars.