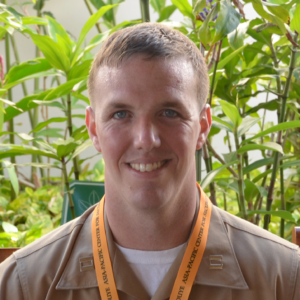 In his paper, Condi explores exclusive nationalism and how ASEAN could potentially serve as a counterbalance to help maintain peace and stability.  He looks at historical examples how the rise of exclusive nationalism may be born out of conflict and often drives those same nations back to conflict.  Case studies include Nazi Germany and 1990s Rwanda.

According to Condi, “[ASEAN’s] Consensus-style governance acknowledges the equality of all stakeholders’ claims. It is possible for these countries to embrace what is great about their individual role, yet contribute to the greater collective from a place of equality.”

“Mutual Independence: Countering Exclusive Nationalism Through the ASEAN Way.”   is available online at this link.  https://dkiapcss.edu/wp-content/uploads/2017/04/Condi-Mutual-Independence.pdf

Captain Jason Condi, USMC, is a graduate of DKI APCSS’ Advanced Security Cooperation Course (ASC16-1) and Asia-Pacific Orientation Course (APOC 16-1). He is currently the South Asia Policy and Strategic Engagements Officer at Special Operations Command, Pacific.  The views expressed in this paper are those of the author and do not reflect the official policy or position of APCSS, the U.S. Pacific Command, the U.S. Department of Defense, or the U.S. government.