This week Dr. Saira Yamin does a keynote Interview with Ambassador Anwarul K. Chowdhury, Initiator of the precursor decision leading to UN Security Council Resolution 1325, as the Security Council President in March 2000.

Ambassador Anwarul K. Chowdhury is a former Under-Secretary-General and High Representative of the United Nations. His legacy and leadership in advancing the interests of the global community are imprinted in his pioneering initiatives at the United Nations General Assembly. Of particular relevance is his initiative in March 2000 as the President of the Security Council that achieved the political and conceptual breakthrough leading to the adoption of the groundbreaking UN Security Council Resolution 1325 in which the Council recognized for the first time the role and contribution of women in the area of peace and security and the equality of their participation at all decision-making levels.

In this interview, Ambassador Chowdhury talks about the progress on UNSCR 1325 as the world celebrates the twentieth anniversary of the landmark resolution. He also explains his proposal for “Doable, First-Track Indicators for Turning the 1325 Promise into Reality” and offers recommendations for governments and civil societies across the globe in advancing the agenda.

This podcast was created by the faculty at the Daniel K. Inouye Asia-Pacific Center for Security Studies.  These weekly videos support our Women, Peace and Security program. 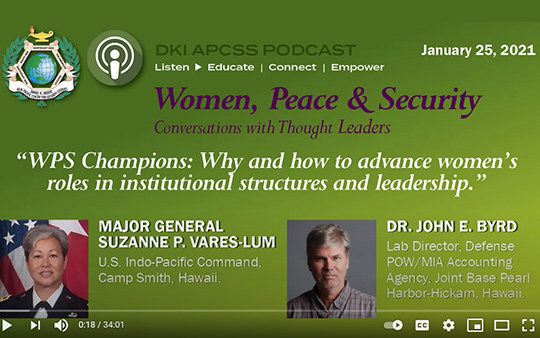 WPS Champions: Why and how to advance women’s roles in institutional structures and leadership

WPS Champions: Why and how to advance women’s roles in institutional structures and leadership

Dr. Saira Yamin speaks to distinguished APCSS alumna (i) Major General Suzanne Vares-Lum, Mobilization Assistant to the Commander, U.S. Indo-Pacific Command, and (ii) Dr. John E. Byrd, Lab Director at the Defense Prisoners Of War/Missing in Action Accounting Agency of the US Department of Defense. The discussion draws on the knowledge and experience of two senior officials in enabling women's meaningful participation in security sector institutions.

In this podcast, Dr. Saira Yamin talks to distinguished APCSS alumna Dr. Natalia Albu, Director of the Strategic Research Center, and Ms. Elena Marzac, Executive Director, Information and Documentation Center on NATO, Republic of Moldova, about the election of the pro-Western Harvard-educated Ms. Maia Sandu, the first-ever female President of the former Soviet Republic. The conversation sheds light on the challenges that lie ahead for this young country as well as its new democratically elected leader.

Men as Mentors and Enablers of Women in Peace & Security

In this session on Women, Peace, and Security: Conversations with Thought Leaders, Professors Al Shimkus and Saira Yamin, PhD speak to Dr. Dave Smith, Professor at the Naval War College and author of Athena Rising: Why and How Men Should Mentor Women and a forthcoming book titled How Men can be Better Allies for Women in the Workplace about his research, particularly as it relates to the role of women in peace and security. Adding to the wealth of perspectives in this dialogue are Ms. Sharon Feist, Ms. Monica Herrera and Dr. Dee Sawyers, Gender Advisors and Analysts at the United States Indo-Pacific Command.

Ms. Myo Pa Pa Htun, Minister Counsellor, representing Myanmar at the Myanmar Permanent Mission to the UN in Geneva speaks to Dr. Miemie Byrd.  Ms. Myo Pa Pa Htun discussed her views and philosophy about women's leadership style and women's contributions to advance peace and security in Myanmar and throughout the globe.

Ambassador Kaythi Soe, Embassy of Myanmar in the Czech Republic, talks to Dr. Saira Yamin about her fascinating journey to becoming one of the top diplomats in her country.

Ms. Shanchita Haque, Minister, Permanent Mission of Bangladesh, U.N Headquarters in New York, talks to Dr. Saira Yamin about what women bring to the table in leadership positions and the role of governments in advancing gender equality.

Dr. Lailufar Yasmin, Professor of International Relations, University of Dhaka, Bangladesh, talks to Dr. Saira Yamin about the misuse of culture, tradition, and religion by extremist and patriarchal forces to influence gender norms.

Additional Director, Pakistan Civil Services Academy, Ammara Khattak, talks to Dr. Saira Yamin about what it takes to break through the glass ceiling in a predominantly male organizational environment.

The views presented during these podcasts are those of the speakers and do not necessarily reflect the policy of DKI APCSS or the U.S Government.