Egyptian Women as Catalysts of Change in the Arab Spring – Dr. Saira Yamin 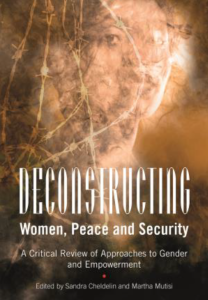 DKI APCSS’ Dr. Saira Yamin has contributed to a chapter to a new book entitled: “Deconstructing Women, Peace and Security.”

The book, edited by Sandra Cheldelin and Martha Mutisi and published by HSRC Press. “Deconstructing Women, Peace and Security” offers a critical review and analysis of many gender-based efforts implemented since 2000, including empowerment policies, strategies, and an in-depth study of four particular cases. It calls out the need for conceptualising gender as a social structure in policy construction. It assesses the “good intentions” of policies designed and implemented with core beliefs they will be good for women. It provides an important case-based analysis of what is (and is not) working,” according to an HSRC Press online story.

Yamin’s chapter focuses on “Egyptian Women as Catalysts of Change in the Arab Spring.”

According to Yamin, “Although the Arab Spring has created new crises in the Middle East and North Africa region (MENA), it also presents many opportunities for democratization and gender equitable human development. The success of the uprisings against dictatorial rule in many countries in the region, and women’s active and visible participation, speaks volumes of their capacity as inevitable agents of change. ”

“The importance of the Arab Spring as a watershed event in the recent history of the MENA region cannot be overstated. The change augurs well for freedom, stability, and the hope for a better future for the citizens of many countries in the region including children, women, and men. Less than a year ago, it would not have occurred to anyone that the deep-seated authoritarian landscape that defines much of the MENA region could stand fragmented. Women’s contributions to the transformation in the stagnant waters of Arab politics are fundamental and critical and are being acknowledged by the international community. The award of the Nobel Peace Prize 2011 to Yemen’s leading revolutionary Tawakul Karman, known in her country as the “Mother of the Revolution” attests to the role Arab women have played in helping to transform the political order,” she added.

You can find more information about the book online at: