DKI APCSS recognized Raut’s contributions as an alumnus who significantly improved the peace and security within his country of Nepal and in the Indo-Pacific Region. Raut’s Fellows Project resulted in seven new provincial emergency operation centers. He drafted eight of the fifteen laws required to support the expansion of the EOCs. He also played an instrumental role in passing significant policies that included the Disaster Management Act, Risk Reduction Policy, and the National Strategic Action Plan.

In 2017, he attended the Comprehensive Crisis Management (CCM) 17-1 course, where he first originated the idea for his Fellows project. In Nepal, national Emergency Operation Centers (EOC) play a pivotal role as the epicenter for disaster surveillance, dissemination of disaster early warnings information, and coordination for humanitarian and disaster relief. The government of Nepal debuted its EOC program in 2010, rapidly expanding its network with centers across the region. However, in 2017, the growth fell short by 21 districts.

“We had a big earthquake in 2015 where almost 9,000 people died,” said Mr. Raut. “In that period, we seriously felt that we had to scale up our emergency management response.”

After conducting financial analysis, it would require over two-and-a-half million dollars to meet his goal of completing his Fellows Project in three years. He pursued joint funding from the Government of Nepal and various donors. He credits attending CCM 17-1 for educating him on the “multi-disciplinary nature of disaster response and mitigation” and the need to coordinate with “all sectors of society.” 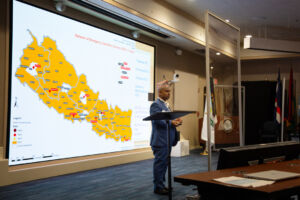 After the course, he applied the skills he learned as the Head of the Division of Disaster Management, Ministry of Home Affairs, Nepal. He led a coordinated effort with government ministries, security forces, and development partners to improve disaster response and mitigation in Nepal. Currently, he serves as Principal Secretary of the Government of Madhesh Pradesh, Nepal.

As an alumnus, Mr. Raut participated in nearly all of the monthly DKI APCSS Alumni webinars, an estimated 95 sessions. He credits the DKI APCSS alumni community as playing a pivotal role in shaping his project and inspiring new ideas that he implemented into his project along the way. In a recent visit to the Fellows of CSC 22-2, he advised them to focus on the new realities and arising situations they will face over time. He hopes that the Center will invest in more regional seminars, meetings, and workshops to access a greater population of interested security practitioners.

The DKI APCSS Alumni of the Year Award is selected by the Currents Editorial Board. Awardees are selected based on criteria that assess: